On July 4th, OUR INDEPENDENCE DAY, Dianna dropped us at LAX and our overnight hotel.  It was a quiet night in a king-sized bed with lots of fireworks and airplanes overhead.  We rose at 4:30 AM and headed over to the terminals to begin our long 34 hour transfer to Reykjavik.  Our first flight got us to Calgary, Alberta, Canada where we were treated so very nice by the immigration staff as they guided us past the check-in process and back into the international terminal.  The Calgary airport had just undergone a HUGE renovation and rebuilding.  The terminal was ultra-modern, and EMPTY. Truly, for the first few hours we had the place virtually to ourselves. 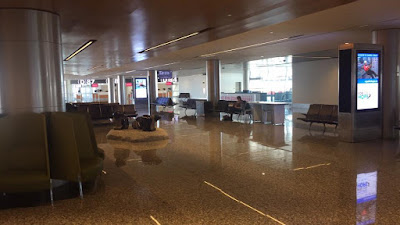 Once again WestJet took off and ten hours later we landed at Gatwick in London.  There we met up with George and for the next ten hours read, walked, ate, and slept in sorta comfortable chairs in the upstairs lounge waiting for our WOW gates to open.  WOW is a new Icelandic airline company, advertised as a "low-priced" carrier...and they are if you don't have over-sized, over-weight luggage...smile.  Their planes all have names.  Ours was called WOW-Mom.  They also have Dad, Bro, Sis, Neo, and Gay (the later flies daily to San Francisco).  It appears their young CEO has a good heart and a sense of humor.  The flight over the Atlantic landing in Reykjavik was three hours long.  It was 10:30 PM and still light outside.  We are at the same latitude as Fairbanks...so right at home. 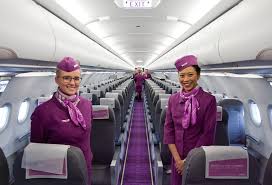 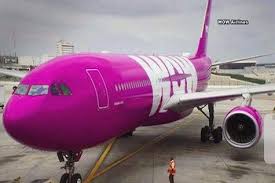 Our rental car was ready as planned, a Toyota Yaris, just big enough for three and all those bags.  The rental for 14 days ran $2500 with the extra insurance package.  Iceland is gonna be a bit pricey. 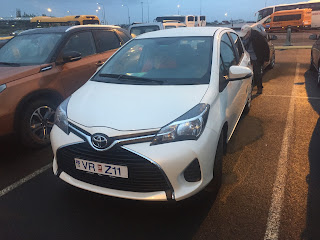 It was a 40 minute drive from the airport over lava fields and grand views of the ocean.  In Rekjavik we easily found out Airbnb rental thanks to Senior Geeps.  No side trips this time.  The little guy took right to the front door.  Our home for the next two weeks is a lovely one bedroom apartment in back of a family home.  The fold-out sofa quickly became George's retreat and we settled in for what ended up being about 10 hours of sleep. 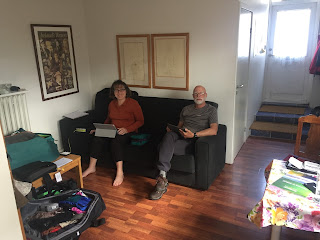 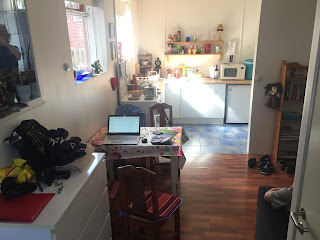 Tom and Bobbie Lucido
We are travel addicts, having visited over 85 countries so far. Now that we are retired, we decided to take the next step. In July 2016 we sold everything, our home, vehicles, businesses, furniture, all of it. We gave away our clothing and household effects..and stored our family keepsakes. Having released the material hold on our lives, and with two backpacks, we left the USA and began our journey into the world as nomads, living in one place for a while, and then moving on to the next. With only a US post office box and an internet telephone number, we are well into our six year plan to see and do as much as time, luck, and interest will allow.