The Next Year of our Nomadic Lives!

AFTER READING THIS YOU'LL KNOW WHERE WE WILL BE.  COME PLAY WITH US! 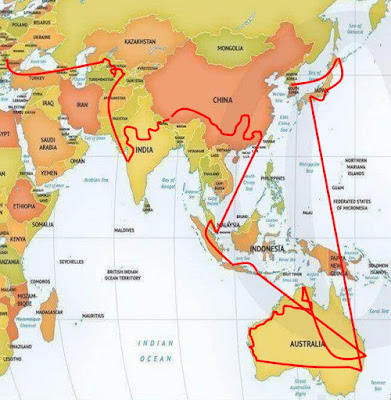 In a few days we depart for Japan - No. 19 on our world list.  We will be there for 90 days, spending a full month in Sapporo, then Tokyo, and then Osaka.

The middle of March we head south of the equator to Australia were we will visit for two weeks with our dear Janey and Louise in Bateman's Bay, south of Sydney.

On April 1st we will go to Canberra for a few days to see a few things we missed two years ago.  We plan to visit our friend Craig at his sheep ranch to see how the rebuilding of his barn turned out and catch up.  We've rented a nice cottage for that time.

We depart for Perth on the west coast a few days later where we will stay at a beach bungalow in Scarborough.  While there we pick up a RV for six weeks.  This will be our rolling home.

Our road trip from Perth to Darwin will follow the coastline up to the Kimberley.  Along the way we expect to see Monkey Mia dolphins and swim with the whale sharks.  There are some pretty amazing national parks to visit as well.  From Kimberley we head into the outback and on to Darwin.  This is going to be quite a trip and we are pretty darn excited.  We end up for a week just south of Darwin in the city of Katherine where we will take several day trips further into the Northern Territory.

A week in Darwin will end with a flight to Sydney and then on to Bali.  We have rented a villa in Bali, as well as two scooters, and will be there for a full week.  Then it is on to Jakarta for a week, followed by a week in Kuala Lampur, Malaysia.

We will spend a week in Singapore before heading over to Hong Kong.  There we have rented an apartment for two weeks.  During that time we will be working on getting our China visa and Tibet Travel Permit.  Then it is off and running for 60 days on the Chinese mainland touring the Southern half of the country.  We haven't a clue yet what we will be doing, other than starting out in Guangzhou and ending up in Chengdu two months later.

We plan to spend a week in Chengdu before boarding the Tibetan railway to Lhasa.  We have booked a five day visit in the capitol primary to visit the monastery and Portola Palace!  Then it is on to Kathmandu, Nepal.

We have rented an apartment for a full month in Kathmandu and have extended invitations to several friends to come join us.  At the end of that month we meet up once again with our travel club gang for a 35-day overland truck tour of Nepal and India.  Ending our final club adventure, a few of us continue on to Uzbekistan for 15 more days.  Saying goodbye to our friends once again, we plan to visit Italy for a month in the north...probably Milan.

Christmas will find us in the Balkans, probably in Bulgaria, where we plan to rent a very large house.  Our son and his Houston family, along with Bobbie's family will be joining us for the holidays.

Then we have to get out of the Schengren Treaty Zone for 90 days (Russia, Jordan, Laos??) before heading over to Ireland to spend time with our dear Debbie Albaugh.

And that is what our lives look like for the next year!  Yikes!