My Visit to the Dentist in Japan

A dining mishap resulted in two cracked teeth.  I researched local dentists, found an office near our house, and made an appointment.  They would have taken me that moment but I wasn't prepared.  I visited the office the next afternoon.  After removing my shoes in possibly the cleanest dental office I have ever seen, I was escorted to a private office where via my pocket translator I told them what was wrong and that I was an American.  They filled out the input forms, asked all the usual questions - allergies, general health history, etc. and then asked me to have a seat.

A few minutes later I was escorted into a large area with three exam chairs.  An all female staff prepared me for the dentist, a young woman of about 30.  She examined my issue, they took a couple of x-rays, and I was informed that I needed one new filling, that one of my cracked teeth would need to be re-filled and then built up, and that my damaged bridge would need to be repaired.  I got out my translator and asked when they wanted me back to do the work and made sure they understood I was only here for another week.  They shook their head and through the translator indicated all the work could be done right now.  I agreed and got ready for what I knew would be several hours in the chair.

Mind you I have been there a total of 20 minutes at this point.  She asked me if I had any pain and I said no.  She went to work without any anesthesia.   They put a electronic device on one of my fingers (not for vitals...it was something for pain management) and something with a blue light in my mouth.  The drill sounded and I thought I was going to go through the roof. I felt nothing.  She worked on the one side with two issues.  Did the fillings and the build up, smoothed it all out, did a bite adjustment and then went for the bridge.   Another twenty minutes went by and I was done.

Three new repairs, everything felt good and I was on my way back to the desk where they began to prepare my bill.  I pulled out my credit card and was informed they only accept CASH.  Ugh.  I told them I didn't have much on me, about 5,000 YEN or $48 dollars.  They pointed to the bank across the street.  It had an ATM.  Then they handed me the bill.  I was expecting it to be about $300.  Guess what, I had enough cash.

$46 USD.  And...if I had been a Japanese citizen with a government issued insurance card...everyone gets one...it would have been free. 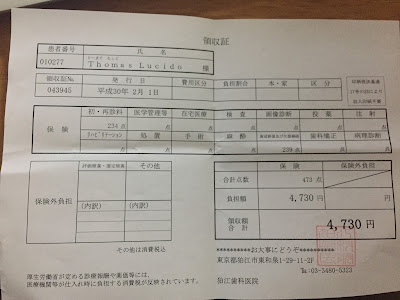