We work early and were on the road heading for the California border.  Views of the Oregon coastline were breathtaking as we approached the Gold Beach/Rouge River area.

We crosses the border with event free (they often check cars for produce and there are sniffing dogs for the other stuff) so I was a bit tense.  The ladies at the border smiled and waved us through.  Entering Crescent City we stopped at the local Fred Meyer for supplies.  We were amazed at the number of homeless. Wow!  So much more evident than in Anchorage.

The sun was bright and warm, but not too hot so we drudged on.  Just short of Willits we had a breakdown.  The sprocket on my bike dislodged and I lost propulsion.  In the middle of the day with no trees in sight, we were stuck along side of the road.  We pulled the bikes to a nearby pullout and took things apart to see what was wrong. Luckily the nut was lodged in the cam housing along with the loose sprocket.  Bobbie pulled out her tool box and we were back on the road, albeit limping, to the next big city.

In Willits we stopped at a auto supply store, got what we needed and since it was amazingly hot by then, opted for some fast food in a very well air-conditioned restaurant.

Back on the road we took the Avenue of the Giants turn off and traveled through massive redwoods for an hours before heading back to the main highway. 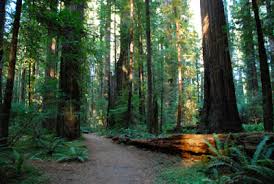 Near Santa Rosa we found a campground a bit out of the way.  Tired, hot, and a bit frustrated, we treated ourselves to a rustic cabin with real beds.  There was plenty of shade and it ended up being a great rest spot.