A quiet and telaxed morning preceeded a nice city tour of the 12th largest city in Russia.  NN was a locked city to outsiders until a few years ago because of its strategic location and industrial complex-military we surmized.  Spanning the Volga snd two other large rivers it is s hub of activity for commerce and two million people.

Our reserved but well-spoken guide led us on a three hour tour of several architectural highlights including churches, a gathering hall from the 1600s, a spectacular cathedral with uniquely decorated onion domes, and ending inside the walls of the local kremlin. 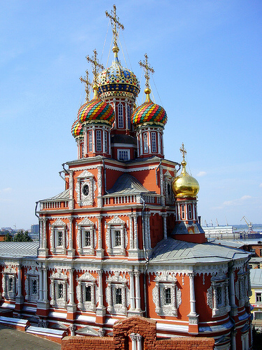 We had six hours of down time waiting until evening to board our overnight train to Kazan. This would be the first sleeper car experience for some.
The afternoon was soent shopping the local stores, enjoying the spa at the hotel, and exploring the surrounding area. We were transferred to the station in time to board our nine hour ride. We split up into four-passenger  cabins, two up and two down and settled in for the night.
Posted by Tom and Bobbie Lucido at 4:23:00 AM